For everyone to be able to do their work well, it is essential that they understand their own actions and know what they are capable of. Added to that, it is good to understand which competencies are important for that work and how these can be recognized in one’s own behavior. The Reflector 360 reports on what people specifically demonstrate through their behavior, based on the competencies relevant for the job. This knowledge can help employees to make a better contribution to their own role. The Reflector 360 also offers a perception of how a person can develop further in order to possibly also provide input to other roles.

For employees to gain an insight into what they are capable of, it is good to get them to assess their own competencies systematically. But that only gives one perspective. To get the most balanced picture, it is certainly just as important to include the assessment of the various parties in the vicinity, such as managers, colleagues, employees and customers. They often see more of the employee’s behavior in different situations. Differences and similarities among the various perspectives offer valuable starting points for discussions about the use and development of competencies.

The Reflector 360 is an instrument employees can use to collect information about their behavior at work. Managers in many modern organizations lack the necessary information to give their employees objective feedback on all points. The Reflector 360 collects the assessments about the employee from all the parties concerned, which is why it is called a 360 degree feedback instrument.

The Reflector 360 can be used in almost all situations in which employees’ development and growth are paramount. Here are just some of the possibilities:

A picture of behaviour at work

HUCAMA routinely works with a competency model of 43 competencies. But Reflector 360 is a flexible instrument: if required, we can include your own competency definitions and descriptions of behavior. Eight to ten competencies essential for successfully fulfilling the job in question are selected for the Reflector 360.

The feedback report is divided into the following parts:

Download a Reflector 360 test report to see how it works: 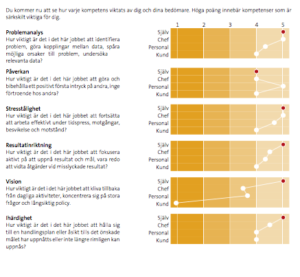